NAMD on GPUs vs CPUs

The benchmark was done for two various size proteins in rectangular water box (TIP3P). Both BSA (bovine serum albumin, 585 residues) and HEWL (hen egg white lysozyme, 129 residues) were initially neutralized with NaCl under 0.02M ionic strength. Then proteins were solvated and the final system size was 250,000 atoms for BSA and 80,000 atoms for HEWL. Before the GPU performance test the minimization and equilibration of the systems were ran, therefore the benchmark was ran for normal production trajectory.

The plot below shows the wall clock running time (in seconds) of all simulations vs number of CPUs/GPUs used. The blue and the red  line indicates the 250k atom (BSA) system on CPUs and GPUs respectively, while the green and purple lines shows the same for smaller system (80k atoms, HEWL). 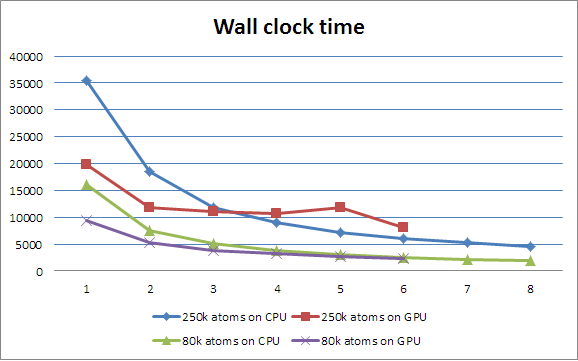 Although in the case of smaller system of 80,000 atoms (HEWL) the benefit of using 1 or 2 GPUs is smaller than the above (because there is less non-bonding interactions which are the only ones calculated on GPUs), the general trend is the same and it is not worth to use more than 3 GPU nodes.

Real CPU time used (burn) by the above simulations are shown on the plot below: 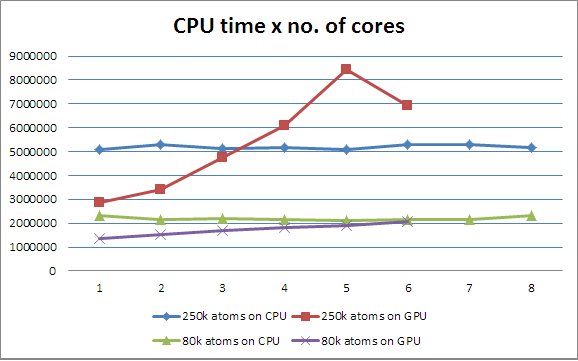