How do adsorbed proteins diffuse at an ionic surface? Atomic Force Microscopy experiments reveal that adsorbed protein is clustered together as a result of its surface diffusion1. Indeed, in a recent study one of us showed that such images can be interpreted using Monte Carlo simulation of the clustering process2. Careful statistical analysis showed that in the case of hen egg-white lysozyme (HEWL) adsorbed onto mica, the protein clusters themselves are mobile on the surface, with diffusivity varying inversely to cluster size3. Furthermore, the spacing of the clusters is consistent with the low monomer diffusion rate of ~ 10-15 cm2/s, so that cluster size can be controlled by protein deposition rate. However, detailed molecular-level understanding into how the protein diffusion takes place is lacking, and it is the purpose of this paper to provide this for the first time. 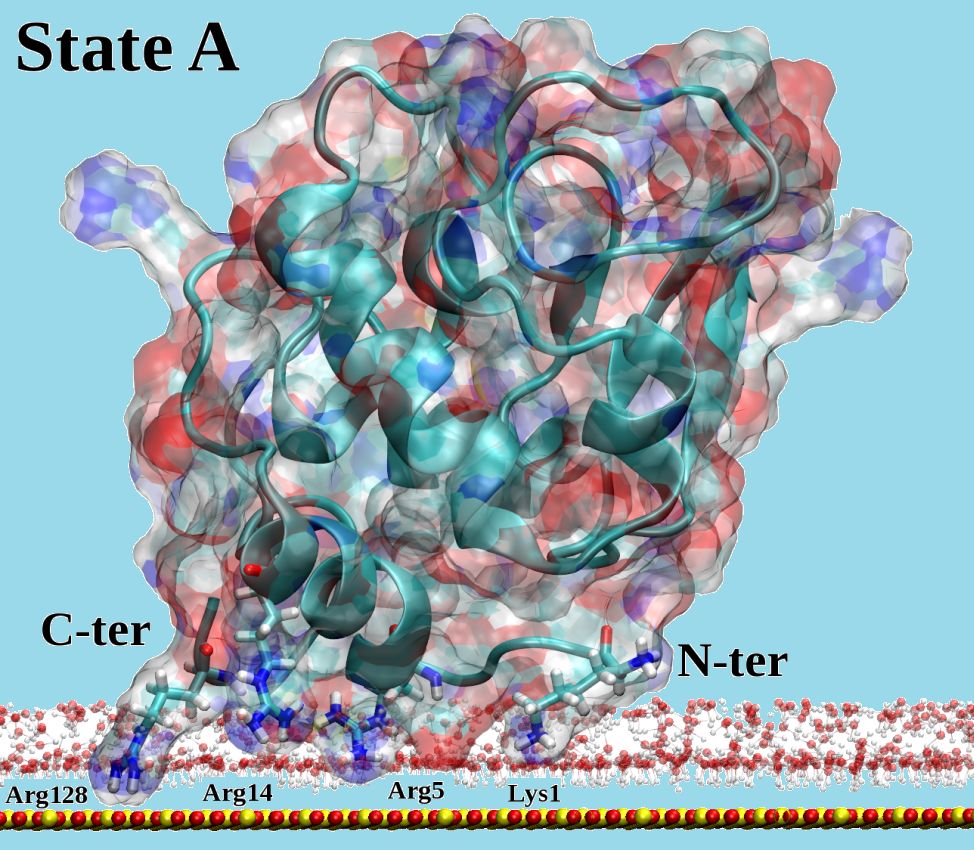 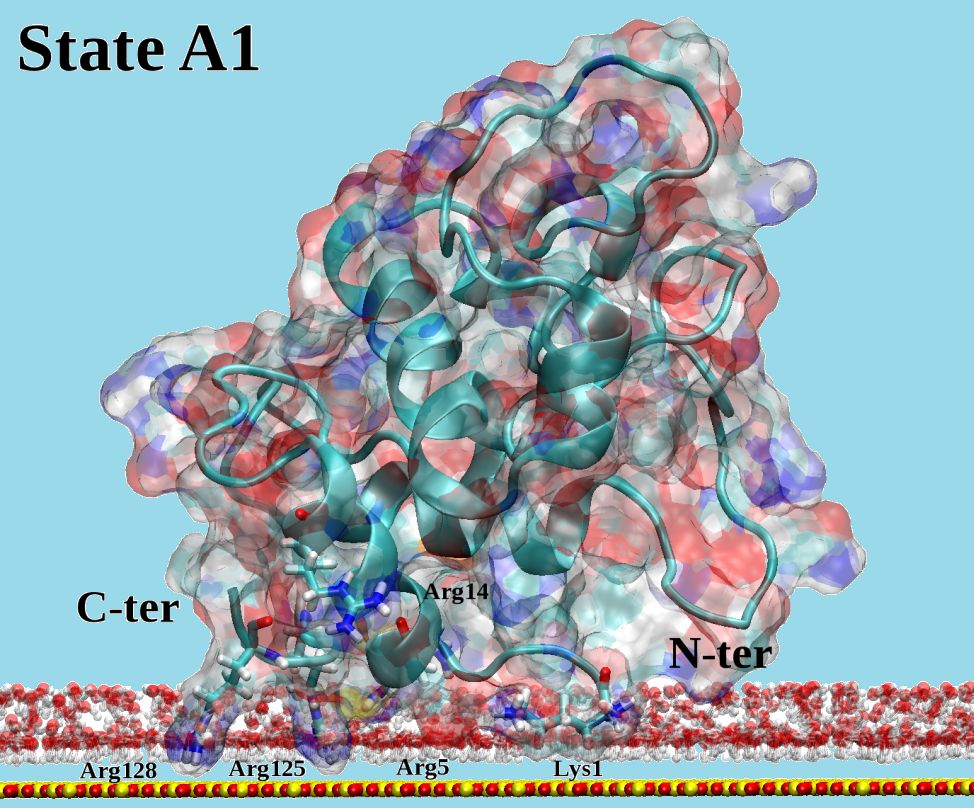 Recently we have studied the adsorption of HEWL at a model charged ionic surface that mimics mica using fully-atomistic Molecular Dynamics (MD) simulation4,5,6,7,8. We found that the lysozyme adopts a preferred orientation above the surface, dictated by is dipole moment and the electrostatic field of the surface. Adsorption therefore takes place primarily at the N,C-terminal face, leaving the lysozyme’s active cleft exposed to solution allowing the possibility of it retaining its antibacterial functionality. The protein is anchored to the surface by a few crucial residues, the most important of which is Arg128 4,5,6,7,8. The side-chain of Arg128 is oriented normal to the surface as the protein approaches, again due to the electrostatic field, allowing it to penetrate the two surface water layers that form above the ionic surface (State A). Adsorbed, native lysozyme does not diffuse on the timescale accessible for MD methods. Steered Molecular Dynamics (SMD) method which uses the external force(s) to speed-up the process(es) is applied to study protein diffusion mechanism and pathways.

Lysozyme adsorbed from bulk is characterised by State A (or alternatively State A1), where it is anchored to the surface by the Arg128 side-chain which presents itself normal to the surface  penetrating both surface water layers. In order for the protein to diffuse, this anchoring side-chain must be raised to State B. From here the protein may diffuse across the surface in State B, giving a total energy barrier ~1.2eV for diffusion from State A. In order to desorb the protein from State A, several other interactions with the outer water layer need to be broken, resulting in an adsorption energy of ~1.6eV. Note that these barriers are primarily associated with the breaking of hydrogen bonds, rather than long-range movement against the electrostatic field due to the charged surface. From State B, the Arg128 side-chain can easily relax to a lower energy adsorption position. Due to geometric constraints the side-chain more readily moves to State A’ where it lies parallel to the inner water layer. The desorption trajectories above imply that State A’ is (more-or-less) as strongly bound to the surface as State A, so interestingly its existence does not imply more weakly bound protein. Nor does it imply a different orientation of the protein, which remains determined by its dipole moment and its interaction with the negatively charged surface. The lysozyme diffusion in this state is more straight-forward, and does not require the initial lifting of the side-chain. Instead the protein can move whilst remaining in State A’, with a lower energy barrier of ~0.9eV. This implies surface diffusion on the second timescale in reasonable agreement with experiment1,2. These results also imply that the long-time adsorption state is A’ rather than the initial adsorbed State A, since the A→A’ transition via State B has only to overcome a barrier of ~0.4eV and so occurs on the microsecond timescale.9

For more information about the project contact Dr Karina Kubiak-Ossowska (karina.kubiak@strath.ac.uk), ARCHIE-WeSt User Support Officer at the University of Strathclyde or Dr Paul Mulheran, Senior Lecturer at the Department of Chemical and Process Engineering at the University of Strathclyde.
References:
For a list of the research areas in which ARCHIE-WeSt users are active please click here.