One of the research topics of Dr. Qing Xiao’s group is using bio-mimic research conclusions into ocean engineering devices to enhance their efficiency or reduce harmful phenomenon. 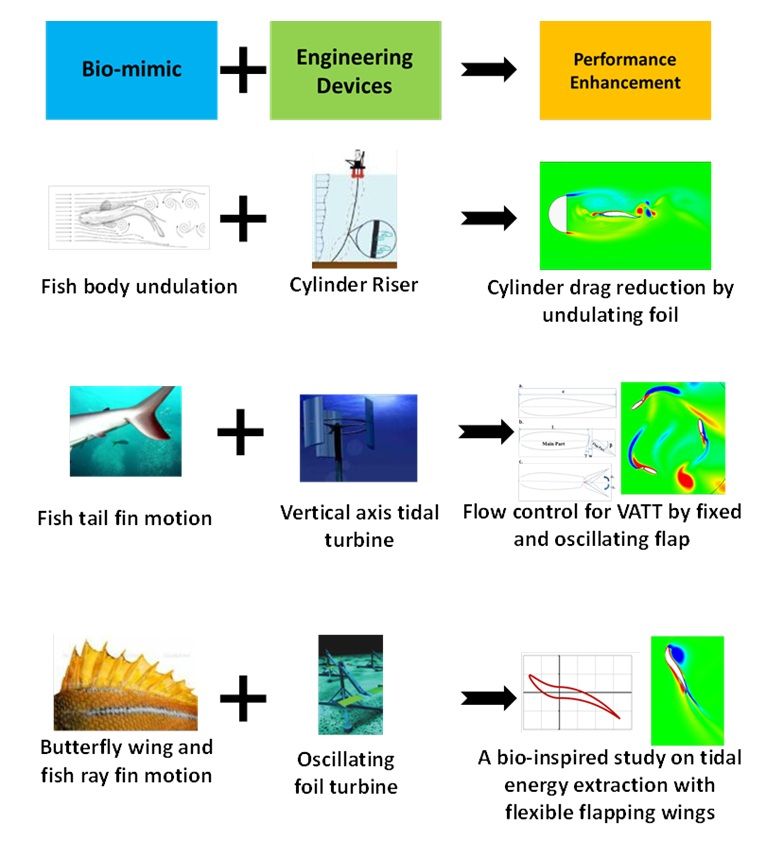 The first specific study is a flow system with a D-sectional cylinder combined with an undulating NACA0012 foil in the wake of cylinder. Cylinder drag force could be considerably reduced if the foil is properly placed in the cylinder wake. In this study, a detailed parametric study on this coupled cylinder-undulating-foil system is carried out by numerical simulation. Particular interest is focused on how Reynolds number, relative size of foil and cylinder, foil undulating frequency, wavelength and gap between cylinder and foil affect the cylinder drag, lift force as well as foil thrust. For a range of flow and geometry parameters studied here, our results show that the maximum cylinder drag and lift coefficient can reduce as 57.4% and 63.3% relative to the cylinder without undulating foil, respectively. Foil thrust coefficient increases to 4 times as compared to single foil. Distinguished from conventional cylinder vortex control method, coupled cylinder-undulating foil system provides some new insights on the vortex control and suppression mechanism 1.

The second research is aimed to explore the potential to improve Vertical Axis Tidal Turbine (VATT) energy harnessing efficiency by using modified blades with fixed and oscillating flap. The fixed flap concept is borrowed from its application in aerodynamics area for reaching a high lift force at low flying speed. Oscillating flap is motivated by our relevant biomimetic studies on the flapping wing propulsion or energy extraction. Present investigation is concentrated on a VATT with NACA 0018 profile blade as its baseline turbine.  Numerical simulations are carried out by solving incompressible Unsteady Navier-Stokes equations at turbulence flow condition. Computed results show that under certain optimal flap geometry and flow conditions, turbine power coefficient reaches 28% enhancement as compared to the conventional blade turbine. Detailed analysis on the flow structure demonstrates that this is related to the effective flow separation suppression and vortex control by applying a fixed and oscillating flap 2.

Previous research on the flexible structure of flapping wings has shown an improved propulsion performance in comparison to rigid wings. However, not much is known about this function in terms of power efficiency modification for flapping wing energy devices. In order to study the role of the flexible wing deformation in the hydrodynamics of flapping wing energy devices, we computationally model the two-dimensional flexible single and twin flapping wings in operation under the energy extraction conditions with a large Reynolds number of 106. The flexible motion for the present study is pre-determined based on a priori structural result which is different from a passive flexibility solution. Four different models are investigated with additional potential local distortions near the leading and trailing edges. Our simulation results show that the flexible structure of a wing is beneficial to enhance power efficiency by increasing the peaks of lift force over a flapping cycle, and tuning the phase shift between force and velocity to a favourable trend. Moreover, the impact of wing flexibility on efficiency is more profound at a low nominal effective angle of attack (AoA). At a typical flapping frequency f*=0.15 and nominal effective AoA of 10 degrees, a flexible integrated wing generates 7.68% higher efficiency than a rigid wing. An even higher increase, around six times that of a rigid wing, is achievable if the nominal effective AoA is reduced to zero degrees at feathering condition.  This is very attractive for a semi-actuated flapping energy system, where energy input is needed to activate the pitching motion. The results from our dual-wing study found that a parallel twin-wing device can produce more power compared to a single wing due to the strong flow interaction between the two wings 3.

For more information about the project contact  Dr Qing Xiao (qing.xiao@strath.ac.uk), Lecturer at the Department of Naval Architecture and Marine Engineering at the University of Strathclyde.